The Loog Guitar for Kids

The Loog Guitar for Kids 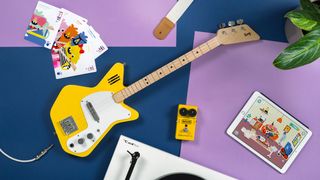 Three-string guitar maker Loog has unveiled its newest line of electric guitar models for kids and beginners, featuring built-in amps and speakers as well as flashcards and apps to teach players how to form chords and play songs.

The new models are the ukulele-sized Loog Mini, designed for players ages three and up; the Loog Pro, for ages eight and up and the Loog Pro VI, for ages 12 and up.

The Loog Mini and Pro are three-string models that use the first three strings and tuning of a regular guitar in order to help kids with finger placement and standard guitar applications, while the Pro VI is the company’s first six-string instrument.

In addition to the built-in amp and speaker, all three models boast a distortion switch above the volume and tone knobs.

The app, meanwhile, features a tuner, games, a play-along songbook with mute, slow-down and record functions and an augmented reality feature that allows users to learn to play via a selfie camera.

And if you already know how to play? The six-string Loog Pro VI doubles as a great all-in-one travel electric guitar as well.

Loog currently has a Kickstarter campaign in place for the new models, with the Mini available for a pledge of $99, the Pro for $149 and the Pro VI for $199.