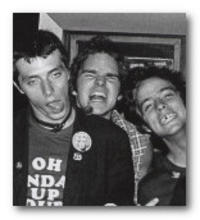 Six weeks after moving to Vancouver in 1979, I went down to the Smilin’ Buddha with a couple of women I had just met knowing nothing at all about the CBGB’s of Canada, nor did I know anything about the headliners that night (July 13th), the Dead Kennedys, the seminal San Francisco punk band whose lead singer, Jello Biafra, later achieved some notoriety by polling fourth in a mayoral race in the City by the Bay.  I never shot any photos of the DK’s, nor of the opening acts but I did snap a few of some of the people outside the club, on the hard part of East Hastings Street. A few of those people, notably Paul McKenzie and Brian “Wimpy” Goble, went on to become prominent figures in the local scene.

I certainly didn’t know that I was embarking on a bit of a project to document something of the thriving alt/punk scene in Vancouver over about the next three years. The majority of these photos were shot at the height of it, some in the Buddha but many more in some of the rented halls around town, the scene being very DIY, by its many talented, creative participants.

I usually attended the gigs by myself because my friends refused to come with me. It was obvious to me that something was happening that I wanted to document. I usually felt that I was the oldest guy in the room, being at least 10 years older than most of the people in the scene. I didn’t know anybody so I was very much the detached observer. Mainly I liked the fierce, white hot creativity of the bands I was seeing and was fascinated by the dissolution of barriers between the band and the crowd, particularly with the bands D.O.A. and the Subhumans. You could feel the crackle of electricity in the air when they were on stage.

My modus operandi was to wriggle my way into the very edge of the mosh pit to get as close as I could, because for better than 90% of the photos I was using a Minox 35 EL (later a GT), which is about the size of a pack of Marlboros. It was the smallest full-frame 35mm camera you could get. The beauty of it was that it was very unobtrusive.

I narrowed the take down to these 42, all were printed 16″ x 20″ on fiber-based paper and archivally-processed in 1988. There were a few all night printing sessions and pains were taken to get them right. I exhibited them as Last Pogo at the Pitt International Galleries, 36 Powell Street, January 9-29, 1989.

Copyright for these images is owned by Gordon E. McCaw. Images from the “Last Pogo” Vancouver Punk Rock Photograph Collection have been made available by Simon Fraser University Library under a Creative Commons attribution, non-commercial license. A full legal outline of the license can be viewed at:http://creativecommons.org/licenses/by-nc/3.0/legalcode. We encourage the appropriate open use of images from this collection for educational and other not-for-profit purposes. Attribution/citation should be provided as follows: Image [insert image number here, eg. MSC166-003] by Gordon E. McCaw courtesy of the “Last Pogo” Vancouver Punk Rock Photograph Collection, a digital initiative of Simon Fraser University Library. [Please include the website url when images are used in an offline or print-based context].