Home/Personalities\/Never Satisfied: Willie Dixon Refused to Serve…Anything But the Blues
Previous Next

“Blues are the roots, the rest are the fruits.”

His momma was weeping by now and Willie knew it. That’s why he couldn’t tell her, couldn’t look Miss Daisy in the eye and let her know he was leaving for Chicago. It would hurt too much—him more than her, maybe. So he left while she was at church. He stuffed some clothes in a pillowcase and ran to the rail yards with his friend Shedrick, never looking back. He couldn’t look back. Willie Dixon had to get out of Mississippi.

The boys slipped aboard a boxcar as the freight train rumbled out of Vicksburg. There were at least a dozen men crouched in the empty car and dozens more inside other cars on that train. Most of the men were much older than the two young black boys and many were white.  The train rolled and rattled through the Delta forest and by the old plantations near Greenville and Cleveland and past the cypress bayous and strange Indian mounds outside Rosedale and Shelby. The car was hot and it stank of human piss and shit. 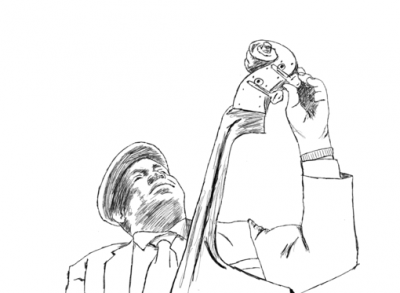 Even though Willie was big for his age, though and smart and confident, he was just a bit little scared as the train slowed before pulling into the rail yard outside Clarksdale.

The boys jumped off as the boxcar crawled to a stop, following the other men as they walked down the road, waiting to catch the next northbound train on the other side of the big yard. The boys were startled when a police wagon pulled up behind them.  Deputies poured out of the truck and began arresting some of the men, including Willie and Shedrick. In his biography, Dixon recalled that only the blacks were arrested that day. The whites were allowed to walk away. The boys were handcuffed, thrown into the wagon with about 20 other black men and driven to the jail in Clarksdale. The next day the county judge convicted the two boys of hoboing and sentenced them to sixty days of hard labor at the Harvey Allen County Farm, one of the most brutal prisons in a state known for brutal prisons. Willie Dixon had just turned thirteen years old and his friend Shedrick Johnson was only ten.

But age didn’t matter to the Clarksdale sheriff or the judge. This was harvest time and the county farm needed forced labor to pick the cotton. Blacks of any age were rounded up on minor charges, such as vagrancy and public drunkenness, and made to work in the fields and mills……….